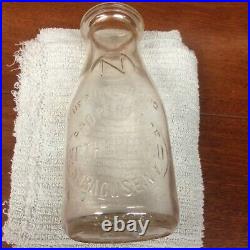 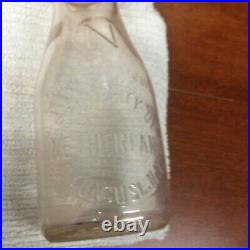 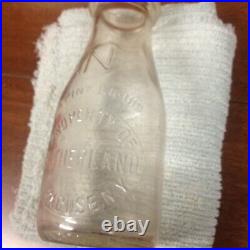 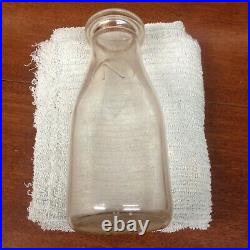 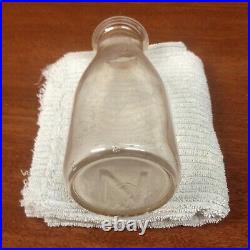 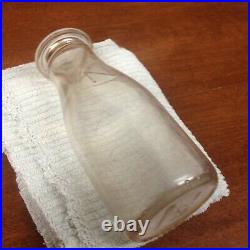 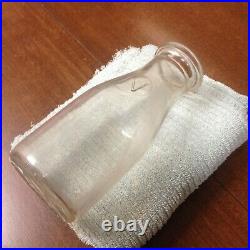 EXTREMELY RARE, very hard to find. Embossed NETHERLANDS Dairy Pint Milk Bottle. From the 1920's Excellent condition, no chips It was dirty from years of sitting, but after it was cleaned, we discovered it was possibly used very little or not at all because of the great condition NETHERLANDS DAIRY Syracuse, New York see all photos for embossed letter markings on the bottle: SIZE. ONE PINT LIQUID On bottom: N in a circle Bottle measures approximately: 7 1/4" tall 3" across bottom 2 1/8 across top Here is the history we have discovered.

This history is to the best of our knowledge, but it is so long ago, nothing is guaranteed. Crowley Foods was founded in 1904 by grocery clerk James K.

In 1915, Crowley moved and expanded his business at Binghamton as the location was closer to numerous dairy farms in upstate New York. Originally known as Crowley's Dairy Company, manufacturing and distribution of dairy products began at the facility on Conklin Avenue and would continue there for almost 100 years. A second plant opened at Newburgh, New York.

Who won the Eastern League. The team was a minor league. Affiliate of the New York Yankees.

For many years Crowley milk cartons proclaimed their motto, "Crowley's Milk As Good as Any Better'n Some". The company has competed in and won many dairy competitions over the years. In recent times, Crowley Foods broke their own record by winning five gold medals. In a competition of prestigious dairy foods at the 2005 Great New York State Fair.

The seller is "mikedelucia1963" and is located in Glendale, Arizona. This item can be shipped worldwide.