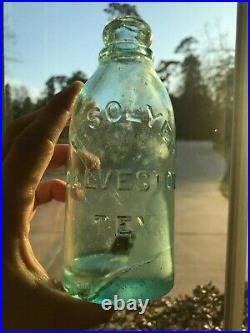 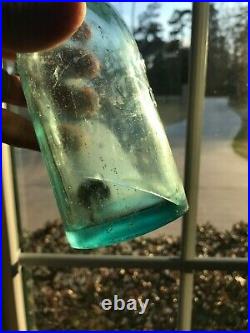 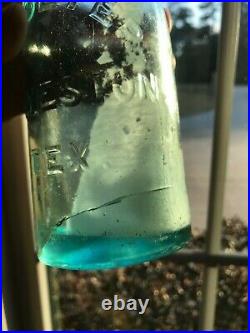 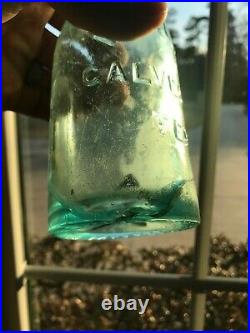 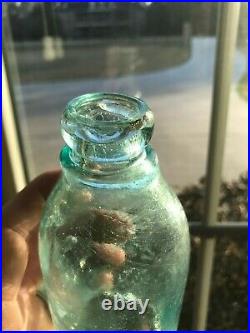 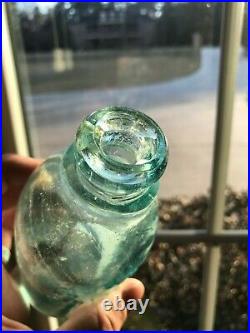 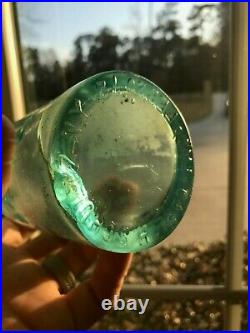 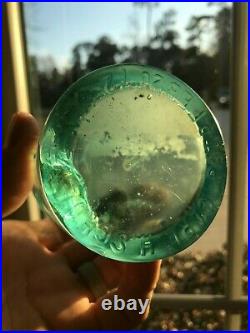 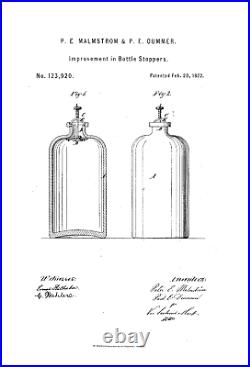 Here we have an aqua blown in mold/tooled lip bottle embossed on the front F. And embossed on the base Carl H. Bottle is 2-11/16 in diameter and 6-3/8 tall and is in very poor condition with some interior haze, some flashing or cracking nearly all the way around the lip (no glass missing) and a massive crack near the base that wraps around 2/3 of the bottle. In 1872, Peter Malmstrom and Paul Dummer of New York were issued patent 123920 that covered this sort of a closure. They apparently must have signed the patent over to Carl H.

Schultz, who was a prolific bottler himself as well as a supplier of bottlers supplies. Nonetheless, Louis Francis Solyer apparently decided to try to use this closure on his bottles and is the only known bottler in the US to have used this particular closure.

Looking at the patent drawing, you can see why that likely is; this closure would not be practical to drink fromthis really would only have been a practical closure for pouring the contents into another glass. Nonetheless, these bottles are extremely rare and typically have significant damage; often the entire top is gone. This example is all present; just cracked. Part of the closure is in the bottle. Louis Francis Solyer was born in Zanesville, Ohio in 1842 and died in Galveston, Texas in 1932.

Starting around 1868 he had a fruit and soda water stand on Market Street in Galveston, Texas. He had 4 different bottles made over those 12 years; the other three were more typical blob tops. This was recently dug in a barrel privy in Galveston, Texas.

Message me with any questions. Solyer Blob Soda Bottle Galveston Texas TX Schultz New York Patent Closure" is in sale since Monday, March 8, 2021. This item is in the category "Collectibles\Bottles & Insulators\Bottles\Antique (Pre-1900)\Sodas". The seller is "engine-cadet" and is located in Spring, Texas.

This item can be shipped worldwide.